It’s a boring topic. I get it. Who wants to spend their precious time organizing their workflow? Not me. Unfortunately, it’s a necessary evil. We all (should) do it. Here are some tips and tricks I use to stay organized as a freelancer.

Organization is great. It speeds up the creation process and helps with making changes in the future. By following the exact same procedure for every project, I no longer worry about the process- just the creativity. I don’t have to search for my files or get confused by filenames.

Let’s back up for a second. I would guess that everyone reading this knows that having good organization is important. So, let’s just cut to the action. Here are some things I do to speed up my process.

Of all the things I have learned about organization, this has to be the BIGGEST and BESTEST and AMAZINGEST thing. It’s pretty simple too.

Here’s a scenario many freelancers know all too well- You get the go-ahead from the client. They give you the footage/graphics/files/code or whatever you are working with in your project. You’re excited to get started, so you quickly copy them into a folder and go crazy with the files.

When you get overly excited to start a project…

Finally, you finish the project and export it. There are hundreds of files in your project folder. All of them have random names.

It’s not really that bad until two months later, the client asks you to edit something in the project. Then you have to search around your computer for your project files, find the right one, hope that all of the files are still there, figure out how you organized your project, and hope that nothing has gotten broken in the past couple of months.

Here’s a solution- use “sample project folders”. What’s that? Good question. I have a folder on my computer that has several sub-folders and project files. Each time I start a new project, I copy this folder and rename it for my new project. Here’s a visual of the folder structure:

The folder structure I use for all of my projects

This makes organization extremely easy. Each project has the exact same folder structure. If I ever need to edit a project I did years ago, I know where the final exports, footage, and project files are. Easy peasy. 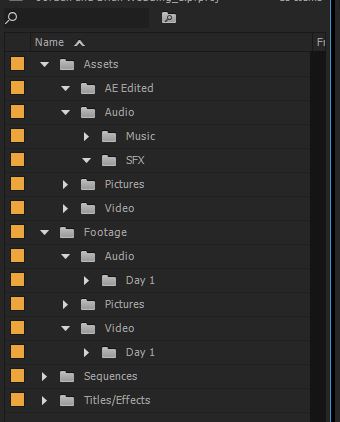 I use a lot of folders in Adobe Premiere to stay organized.

This process can be applied to a lot of different project-based workflows. It definitely applies to creative professionals, but has the potential to work for other industries too. An engineer for instance could have a sample folder for their projects that work for them. The possibilities are endless.

The old-me would say, “Why does it matter what you name your files? The names are arbitrary.” Well, I’m here to say that it does matter. I’m still suffering from my poor naming that I used to use.

It all starts with importing the files. The camera names them “IMG_0001” with an incrementing number. The issue is that over years of working on projects, you now have hundreds if not thousands of files that are all named the same thing. If you try to search the computer for the file name, there are way too many results. Also, if these files get moved, you now have no idea what project they belong to. 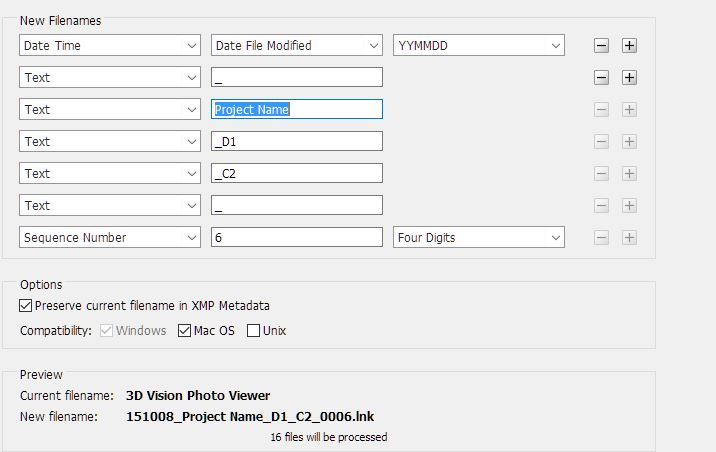 The better solution- use Adobe Bridge’s batch rename tool to name the files according to the project. It also has a useful function where you can embed the date into the filename. In addition to that, I add the day number of the shoot and the camera number. This extra information doesn’t take very long to add but helps the editing process immensely.

I’m exaggerating some, but I’ve seen some pretty terrible naming before. So instead I’ve learned to go name my projects simply- “Project Name_1”. I use the underscore and then a number to denote a version. This way if the project was called “Promo Video 2015”, the underscore can separate the two numbers. “Promo Video 20151” vs “Promo Video 2015_1”. I know it’s a small change, but it’s the little things that make a big difference.

I realize this hasn’t been the most exciting blog post. Hopefully, it has been helpful to some people out there who struggle with organization. If you made it this far in the post, you deserve a GIF. So here you go-