There’s one week in the year when Austin, TX becomes an insane mesh of people, technology, and music. Thousands of people pour into the city, excited to see “the next big thing”. As this is my first March in the Austin area, I was able to experience it- SXSW…on a bike.

My SXSW adventure started off great. Because of the crazy traffic downtown, I decided to park 15ish miles away and ride my bike in to town. It was beautiful weather and a beautiful idea….

I realize that I should back up for a second. Some of you might not know what SXSW is. It’s a yearly festival held in Austin TX that has three sections- film, music, and interactive. Big independent film productions make feature/short films to show at the festival. Artists from every genre fill the streets with music. Big name companies in the interactive space show off their latest gizmo. 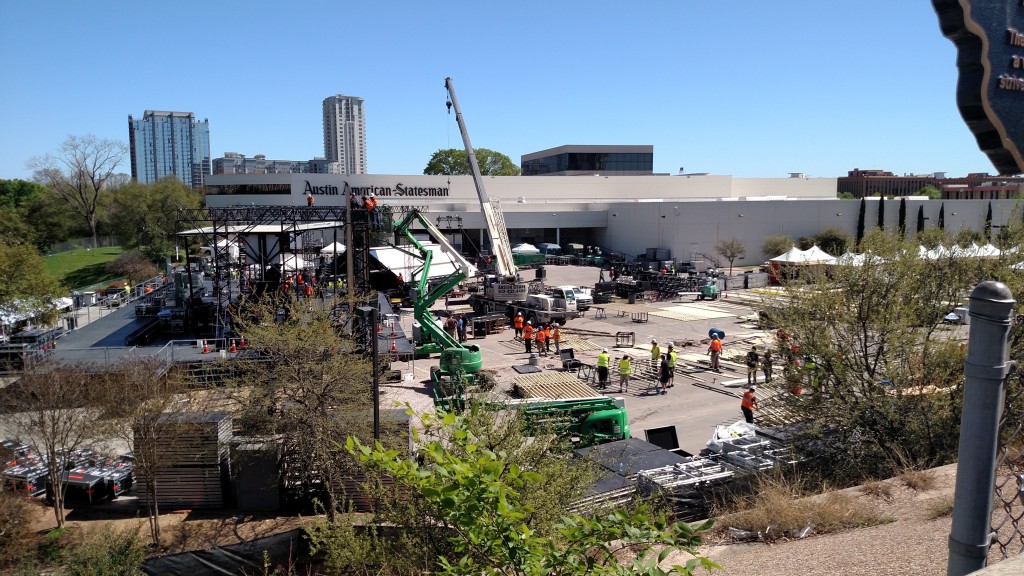 It’s hard to tell, but there is a massive work crew setting up a stage for one of the concerts.

Because this is my first year in Austin, I decided to not buy a badge and go the free route. Badges are close to a thousand dollars, so I thought I would get a feel for it this year and then potentially buy a badge next year. (Badges get you into the actual conference).

However, as a non-badge holder, there is still a decent amount to do. SXSW has several free events like a Job Fair, a Maker’s Conference, several outdoor film screenings, and many music festivals.

On top of that, there are a ton of unofficial events that companies put on. (Which is a great way to get lots of swag…)

Anyway, I ultimately decided to go to as many free events as I could in a day and explore the whole festival via bike. It’s hard to get around in a car and the event is spread of a large area, so riding a bike is probably best.

To sum up my experience, I made a short video. It was going to be much longer and include a lot more video, but unfortunately, my trip ended prematurely.

I got a flat tire. Rooky mistake. I didn’t bring any extra tires (or really anything to help in an emergency).

I was 7 miles from my car. And I walked the whole way back. Pushing my bike along. There were big patches of mud and I was very dehydrated. What had been a magical day, was now a long exhausting day.

I was planning on going to multiple days of the festival. Go to every event. Film everything I could. Make a sweet highlight video with interesting slow-mo shots and dynamic timelapses. But I lost all of my energy for it. I will definitely try again next year (and hopefully have a badge). 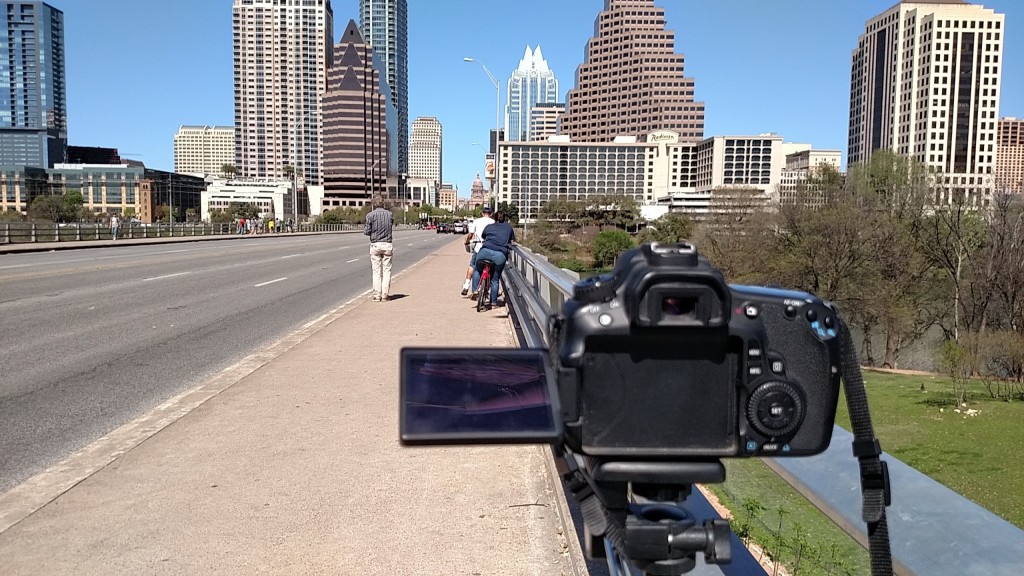 Camera-ception. I had a simple setup to shoot my long-exposure timelapses.

This story has got me thinking about inspiration and creativity. It’s amazing to me how a simple mood change can affect creativity so much. I went from complete excitement with the creative juices flowing to a complete lack of inspiration. By the end of the day, I no longer even wanted to make a highlight video of SXSW.

And that’s why it has taken my two weeks to post this. I needed time to recover to where I felt like I could edit the video. Unfortunately, the damage had been done and I didn’t have very much footage (hence the video only be 30 seconds long…)

My biggest takeaway from this experience is this- Sometimes my creative drive will be lost. Sometimes it takes time to recover. I need to constantly fight for that initial excitement I had at the beginning of the project.